For this weekend I covered the New York border up to the Bull’s Bridge. While not a lot of miles I added a few by doing a loop past the campsites up to the market for a root beer, and then back to the campsite. I did that again the second day, without the stop at the market. I met many nobo and sobo thru hikers, and a mom supporting her 15 year old thru hiker. I helped them with advice on town resources, itineraries, shelter and campsite options and conditions and had some fantastic conversations with them all about trail names and hiking in general.

I really enjoy this part of the job. There are a lot of great people out there on their journies and I love to hear their stories. One of my favorite moments of the weekend was saying “welcome to Connecticut” to a thru hiker just as he was entering our section and I was reaching the end of my shift at the New York border. He said thanks and then I heard him holler gleefully as he reached the Connecticut sign and I smiled as I walked in the opposite direction. I really felt like a trail ambassador and representative of this fine section in that moment.

Another great moment was going down to the river after setting up my camp to see our resident blue Heron we named Jim. He stood on a rock about 30 feet across the river near the opposite bank and posed there for about 30 minutes while I sketched him from the beach. I also came across a raspberry patch which gave me a boost of energy and morale.

The bugs were merciless and the humidity was pretty bad, but I always enjoy and embrace the suck because it is always so special to be out there. It heals me so. I will be headed down to North Carolina in a week to do 2-3 days of hiking there with Fielden Stream. Those glorious balds should bee just the therapy we need to deal with a bunch of difficult things we’re dealing with right now.

I brought my hammock out again after using it in my yard at home a few times and getting more comfortable in it. I also realized its more comfortable for me without a pad. So I will either need to get an underquilt or just use it in the dead middle of summer when its 70+ degrees at night. On this night it dropped to around 59 and being right near the river, it was colder, and I had an hour or so where it was a bit uncomfortable and I really bundled up but this is also because I brought my summer 55 degree bag not my 24 degree down bag.  I will find the right combinations, as its really much gentler on my back! I tried the inflatable pillow and while I like it, it slid around a lot in the hammock, so when hammocking I might stick to my current clothing bag pillow technique. It’s easier to keep in place.

And I finally tried out my Dirty Girl Gaiters my daughter got me and loved them!  So they will be a regular item going forward.  I really got into the zone this time out. I just really wanted and needed to be out there very much this time. I joked with my wife when I returned and was in a bit of a transition fog that I had re-adapted to my wild origins like a runaway animal does when in the wild too long. If only I could stay out much longer. One day. 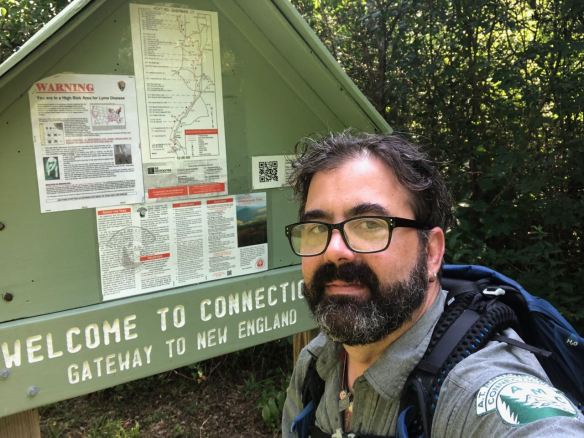 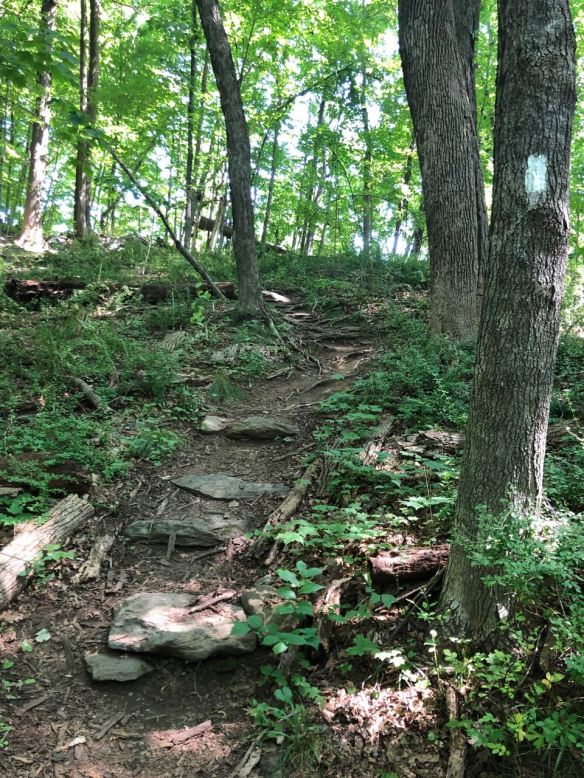 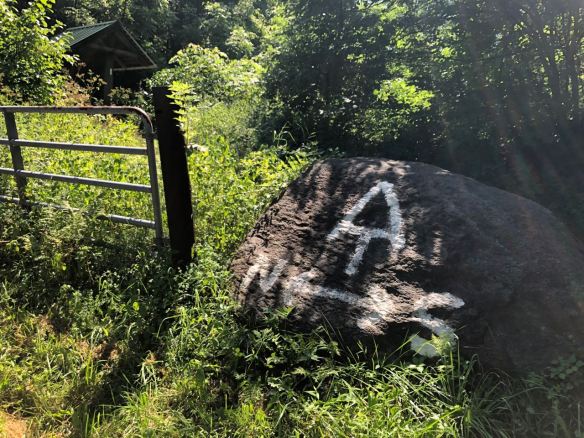 The trail above the Housatonic 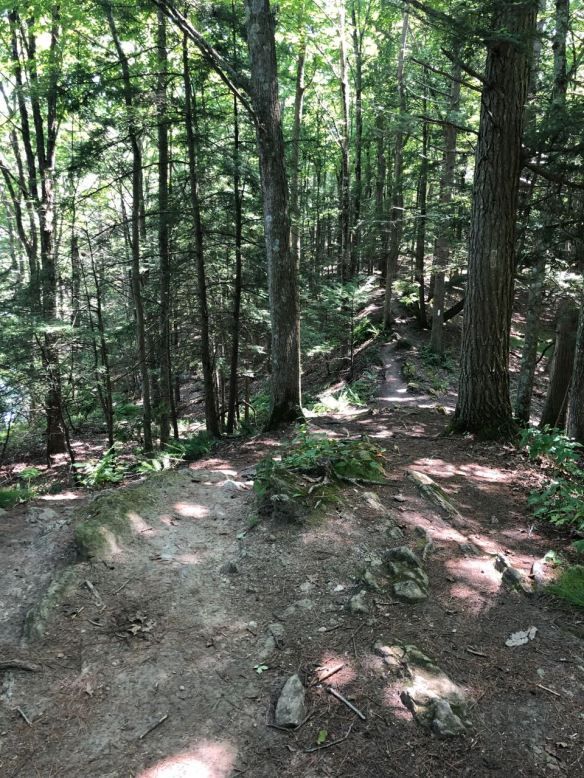 The trail along the Housatonic 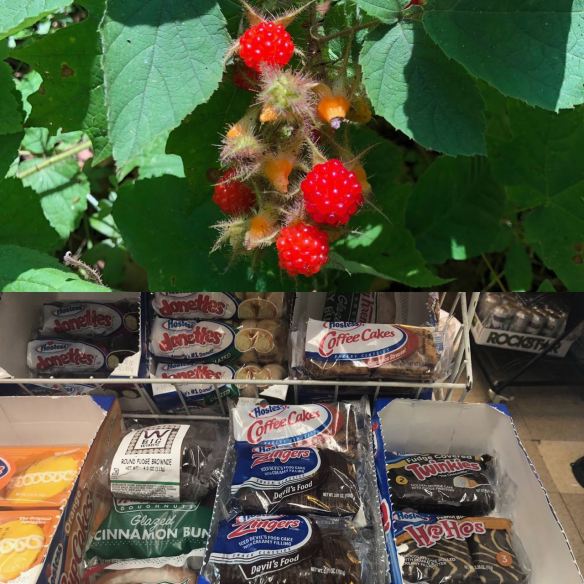 A tale of two trail snacks 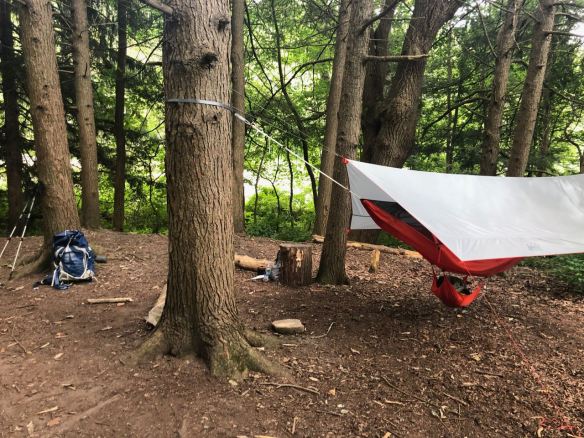 LIvin in a bag down by the river 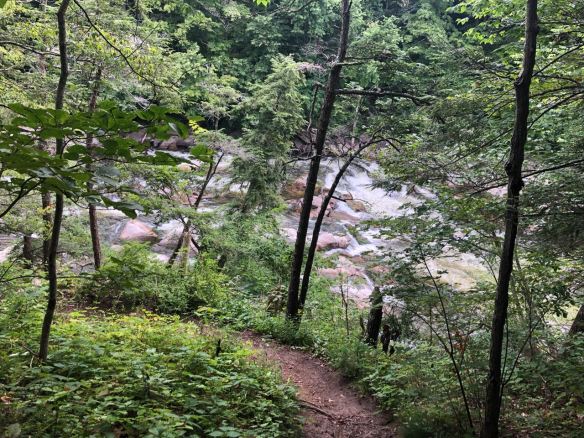 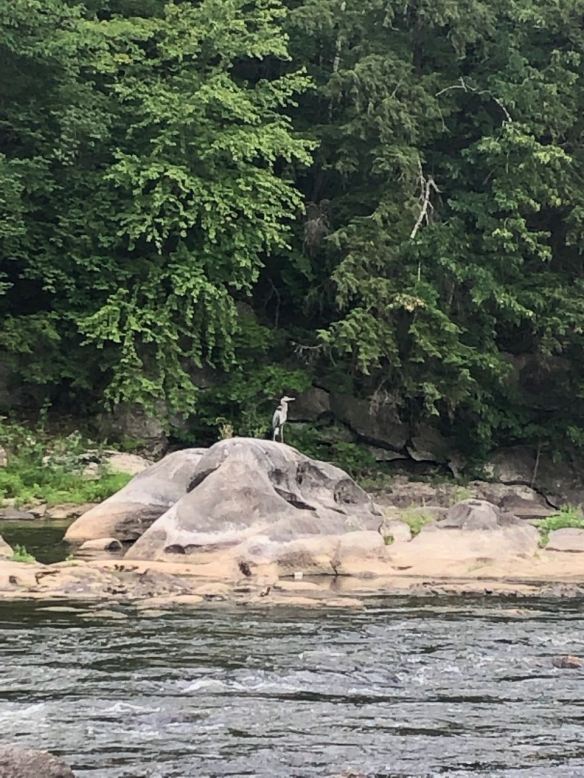 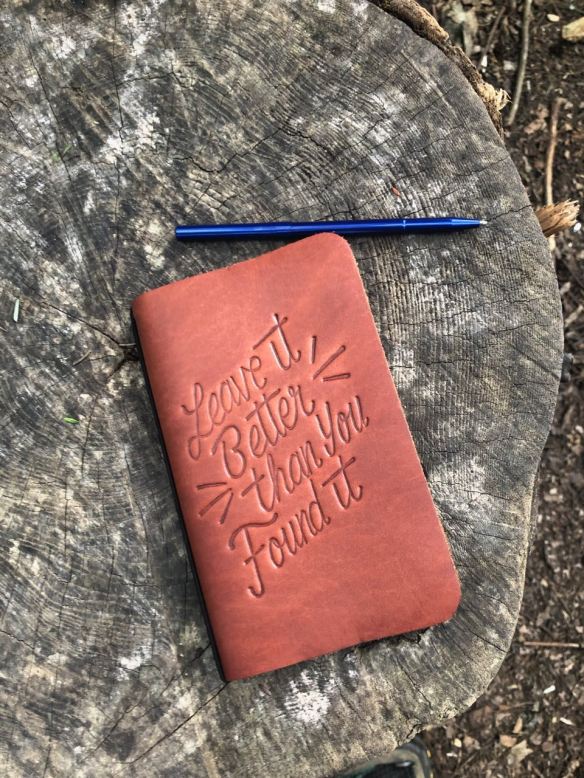 My sketchbook and trail journal 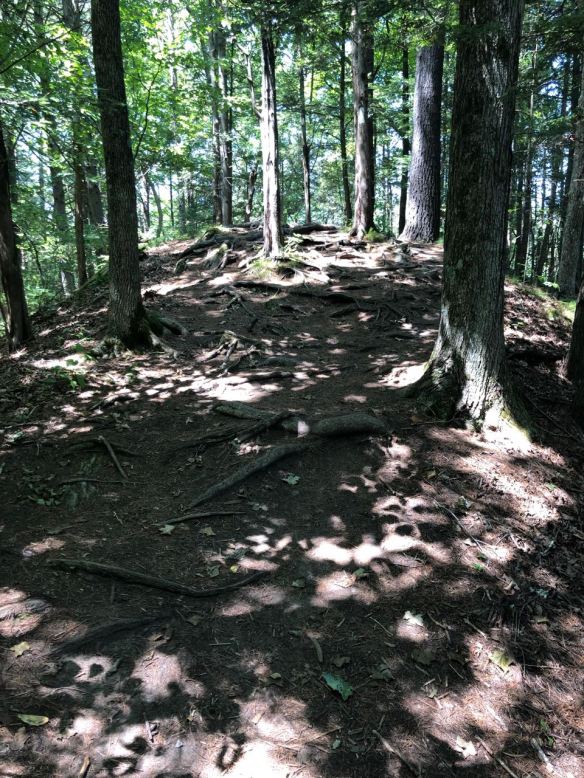 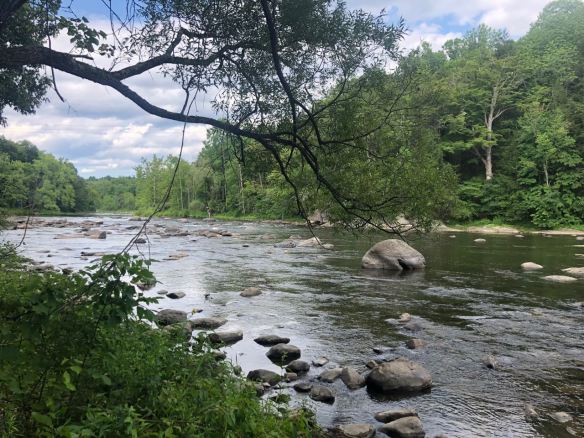 Looking upriver from the campsite 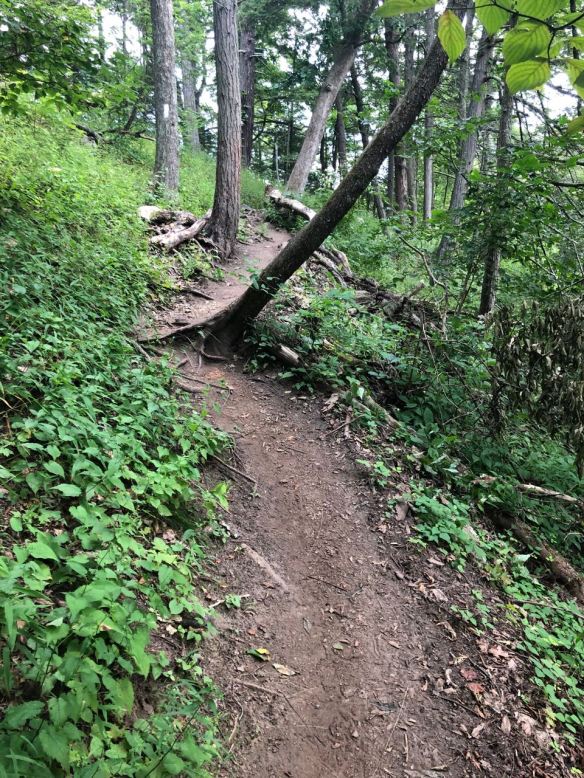 Winding up that hill 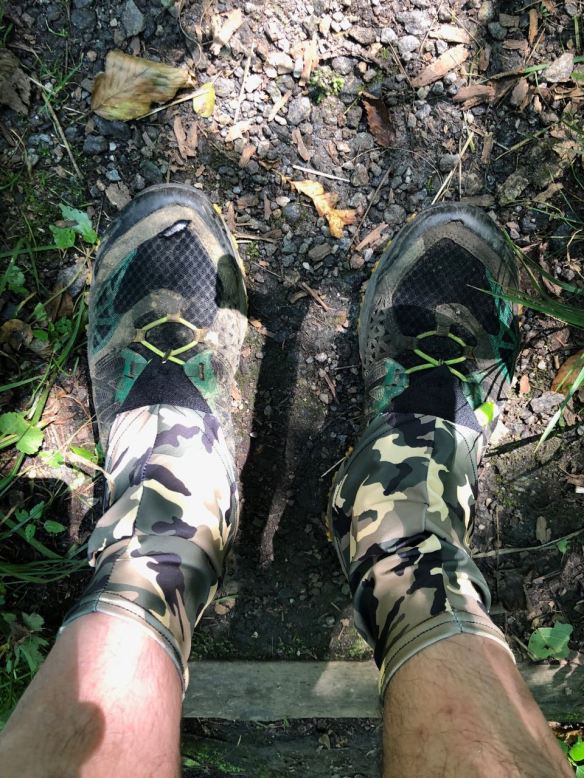 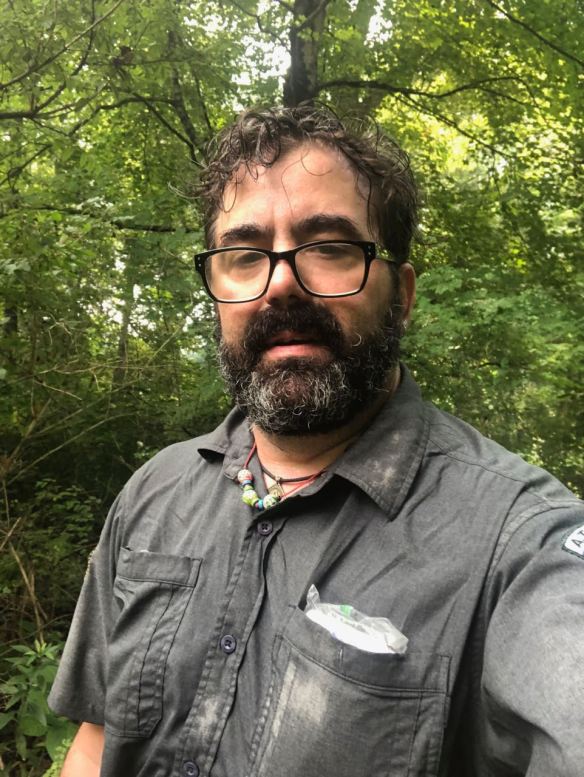 So humid my shirt is drenched with sweat 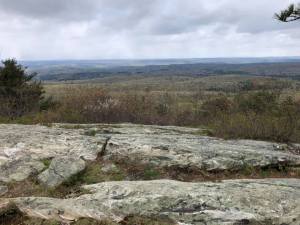 View of the Pennsylvania Poconos from Culver Ridge

Last weekend we finally made it back to the trail in New Jersey to knock out the rest of one of our last two sections in the state. We planned it as a backpacking trip, and did all the prep, including shopping for a few missing items, getting out our tent and anticipating the bad weather, with our new gaiters and my rain kilt added to the supply list.

The plan was an overnight at Gren Anderson shelter, and an evening start. I got out of work early so we could make the trail head by 5:45. 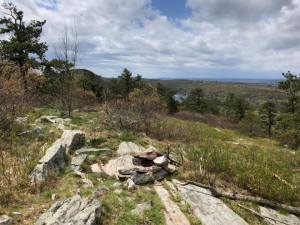 That part of the plan at least was successful. But when we got in the car and the weather began to destabilize, the new plan was to make the call at the trail head. If it was going to be worse, we stay at a hotel and day hike all 9 miles when the weather cleared in the morning. If we thought it was manageable, we stick to the original plan of the overnight at the shelter. It was only 2.8 miles in, and the initial climb out of Culver Gap wasn’t too bad. 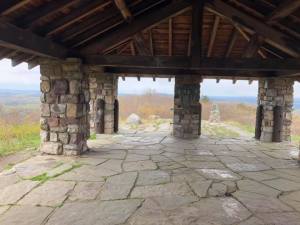 The further south we drove, the worse the weather and the forecast became. Lighting was visible, and tornado watches were added. We made the call to stay in town for the night and hit the trail in the morning. As we drove away from the trail head to the hotel, the heavy weather hit, and we were relieved to not be out in it. While we have had many a very wet weekend, lightning and tornado watches are a different ball game, especially when hiking with metal poles and setting up a tent that has metal poles. 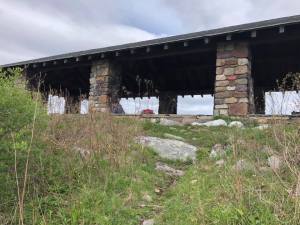 We found a lovely old historic inn in nearby Milford, Pennsylvania. It was built in 1852, and has a fancy restaurant and slightly less fancy French Bistro in the basement. We ate there and enjoyed all the photos of the many very famous people who have stayed there over time, from Diplomats, US Presidents, poets, authors, foreign dignitaries, actors and actresses and more.  We celebrated a belated anniversary dinner in the bistro and enjoyed talking about and trying new wines with the somm. This area used to be the recreation capital of the northeast, hence all the famous visitors. It was a nice quaint little town, matching the ambiance of the old inn. 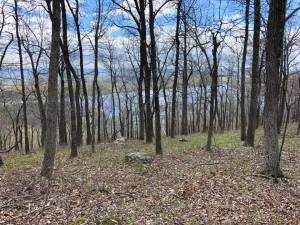 The bad weather stuck around until almost 11pm, and we were again relieved to have made this choice. We chose to do the hike southbound so we could maximize miles over the time allotted. We stayed very much on schedule, and the almost 9 miles was still quite a workout for us for our first section hike of the season – even with day packs. In the morning we were up and out early, skipping breakfast in favor of an on-time trail start. Just .2 in from the road is Mashipacong shelter. 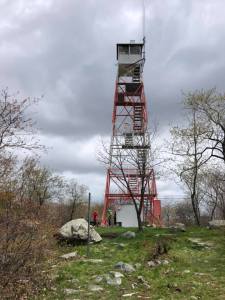 This is probably why there’s no overnight parking allowed here. Too easy to get party groups in. Its a nice shelter with a bear box that the rangers apparently fill with water for hikers. Though I did not check. There was a ‘no fires’ sign in the shelter, and a big fire ring right in front of it. Always…

There was also a painting of the shelter hung in the shelter, done by an artist who has been doing these of New Jersey and Connecticut shelters recently. This one was new, according to my maintainer friend. We signed the register and then carried on along the spine of Kittattiny Mountain. It was a chilly 48 degrees and the winds were strong and shaking the trees above. 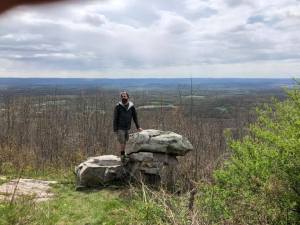 But it was not raining and the views were glorious. We stopped and talked to a maintainer and his friend for a while, and passed a few boy scouts and leaders as well as a few section hikers on our way up to the old CCC pavillion on Sunrise Mountain.

There we encountered several locals who drove up for the view, and took some pictures. This is the second highest point in New Jersey on the trail, and a very popular tourist destination because of the stone pavilion and road to the top. 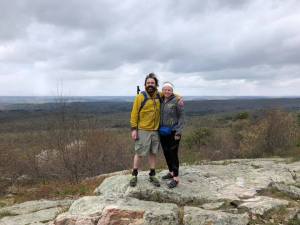 People get married here as well. You have long views of the Poconos and Pennsylvania on one side, and New Jersey on the other. We could see all the way to the end of Culver Ridge, where the fire tower is, and where we were headed. After a snack we headed on our way down, passing at least 20 more hikers making their way up.  We were grateful to have the place mostly to ourselves for our break. We encountered a few swampy areas with boardwalks, and some swampy areas that were much larger because of the heavy rain the night before. 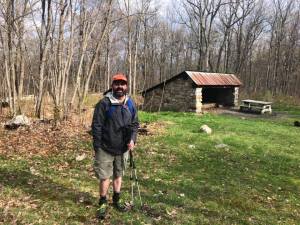 This would not have been easy crossing in the previous night’s weather. And all the brooks were high too and took a little extra negotiating to cross. But there wasn’t much challenge in the terrain otherwise, and we soon passed the side trail to our original planned home for the night, Gren Anderson shelter.  As it’s .3 down a side trail or so, we continued on. Turns out we got a great view of it from Sunrise Mountain road on our drive back to our car. Its not far from the road.

We had a small but very gradual climb back up to the Culver ridge, and arrived at the fire tower and radio tower. We had another snack and took some photos of a group of boys and leaders hiking, and they took some of us. From there, the trail followed the southern side of the ridge looking over Culver Lake. There was a lot of new green coming in, and the trail was quite scenic. We reached the crest of the ridge, which had its own lovely views of Culver Gap, and north to the Poconos of Pennsylvania. 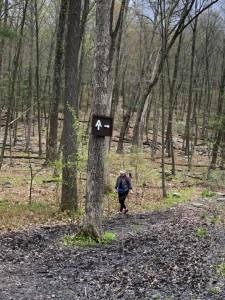 The descent was not steep or long, but it was rocky, and I’m sure we wouldn’t have enjoyed scrambling over those in a heavy downpour. Those are slippery little ankle twisters. We reached the lot at Culver Gap at the same time as our shuttle driver, about 30 minutes early, though I had also given him a heads up from the fire tower that we would be early.

We have already planned our next section overnight to complete New Jersey in 3 weeks, and arranged for him to pick us up, so that’s settled. Hopefully we will get nice (or nicer at least) weather, as some of the best views on the New Jersey part of the trail are on this section.

I did not get to try my rain kilt, so stay tuned for my Highlander moment in the rainy future. I also didn’t use the gaiters as there’s some sort of velcro attachment system you need to put on your shoes and let cure for 24 hours before use. So for the next one…

You can watch the video here.

We’re looking forward to finishing New Jersey, and have loved how beautiful it’s been. It’s certainly changed our ideas of New Jersey. Also I will be out many times this month with our Connecticut AMC chapter doing more trail jobs, and meeting the new seasonal ridge runner staff for some of their training events at the end of the month. Then my weekend ridge runner season kicks off in earnest at the beginning of June.  Fielden Stream and I will still get some sections of trail in, though perhaps less than usual. We will be doing a section of Pennsylvania with our friends from there again this June, and may start either Vermont, or take a 4-5 day trip to do all of Maryland. We will play it by ear as there’s a lot of things going on for us this summer.