We had a fantastic 2.5-day backpacking trip in North Carolina last week while down there for a graduation. Here’s the notes right from my trail journal. Photos and a link to our video of that hike are below.

Spent the previous night at our friend’s family cabin in Otto, NC. Then he helped us on this morning to drop our car at Deep Gap and drive us up to our start at Rock Gap. As it’s a big loop here, it wasn’t far between trail heads. We met shuttle driver Jim there who gave us lucky stones and his card, just in case we needed a bailout as our friend was headed home to Charleston after dropping us off.  A beautiful short 3.8 mile hike up to Long Branch shelter – it was at 4,500 feet and had a great water source and brand new shelter. It’s on a steep slope but the shelter and tent pads were placed in flatter areas.  We made a fire in the legal fire ring to ward off bugs and since we had a lot of time there, and chatted a bit with Rusty Jane, who was hiking half the trail and only had 100 miles to go. Coincidentally, Jim had shuttled her this afternoon to her starting point at Winding stair gap so we knew about her before we met!

Some big climbs and bigger views. The descent off Albert Mountain was steep but we were glad to go down it. Our new knee sleeves really helped on these steep downhills. No view at the fire tower but got great views from a ledge on Big Butt and even better (including  Pickens Nose) from Little Ridgepole mountain. Sad to see all the trash in all the fire rings but its usually locals and not thru hikers.  Met a father and son out for a section hike at the shelter. Enjoyed their company and campfire.  Had an unexpected heavy downpour overnight but no biggie as its our last night out.

Dried things out for a bit and then opted to hike to the next water source a few miles down trail rather than the one at the shelter as it was a trickle and down a steep hill.  When we got to the creek south of Beech Gap I also changed my socks and put on some band aids as the 2 days in the same socks was giving me hot spots despite my best efforts to clean my feet.  We also had another snack and filled up both our water supplies. The band aids and new socks worked but the trail up Standing Indian was completely overgrown and wet and swarming with bees, and the trail was eroded in many spots and I almost slipped off the trail. My left leg saved my right one which wanted to go off the edge of the eroded trail. And I didn’t see it because of the soaked, overgrown, shoulder-high plants. Going to email the trail club there.  So my shoes and eventually my socks and bandaids soaked too but they managed to hold on until we got to the car. At the  top of the long climb up Standing Indian we met a man named Erik who had taken the lower ridge trail up from Standing Indian Campground and he and I hiked to the view at the summit which was incredible. Sad to see the camping area up there also littered with trash. PLEASE, Leave it better than you found it! Then it was a steep descent of many switchbacks to Deep Gap and our car. 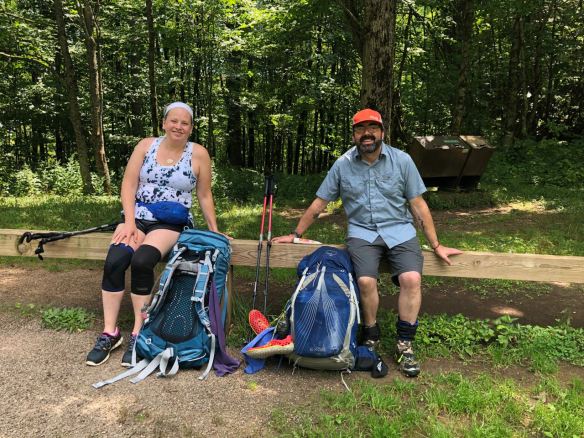 About to hit the trail at Rock Gap 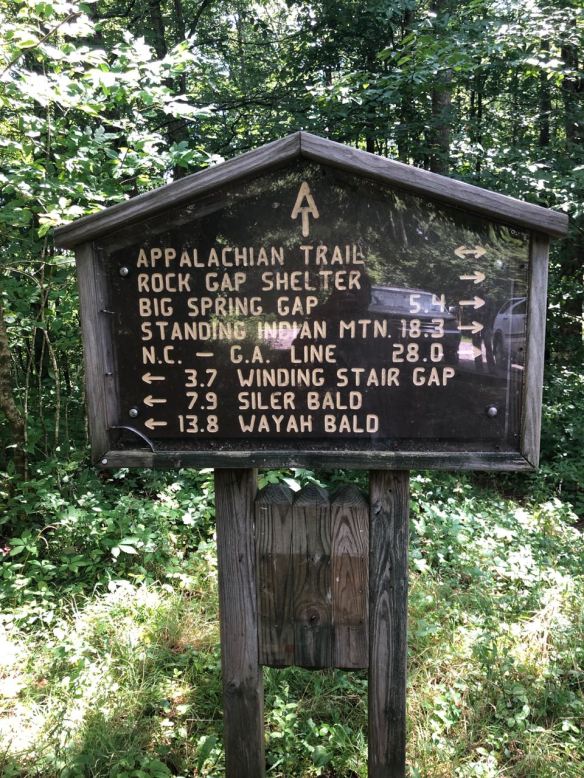 At the Rock Gap trailhead 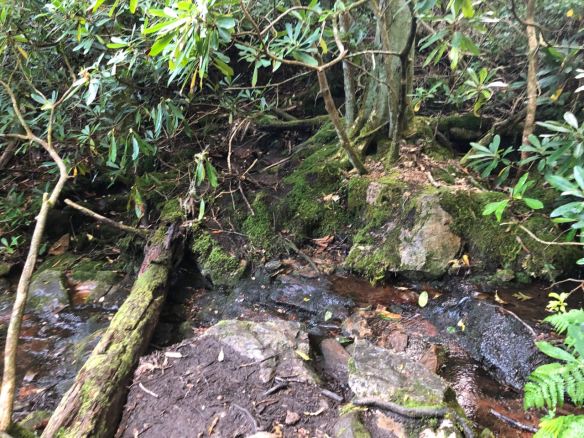 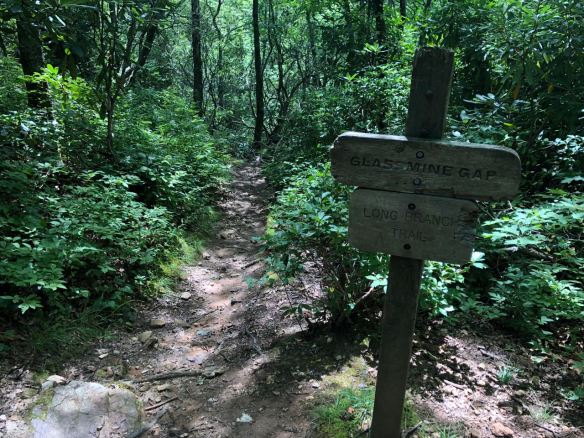 Our tentsite at Long Branch Shelter

What a bunch of fungis

Or from the tower 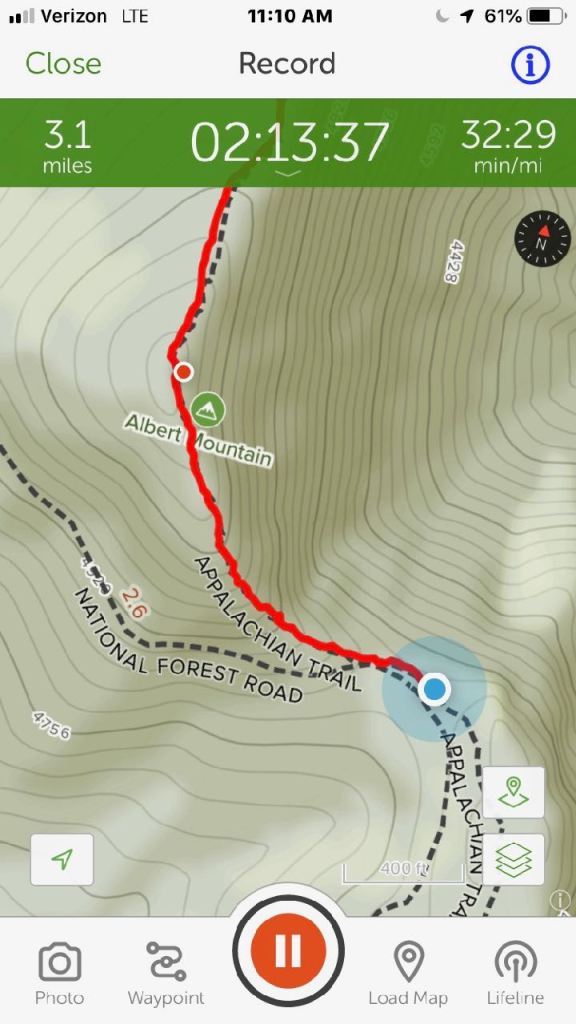 The descent off Albert 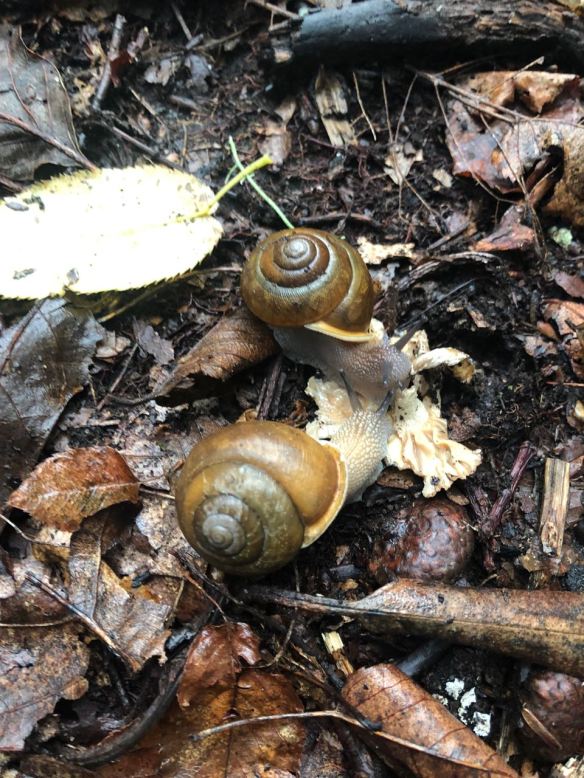 Overgrown as can be 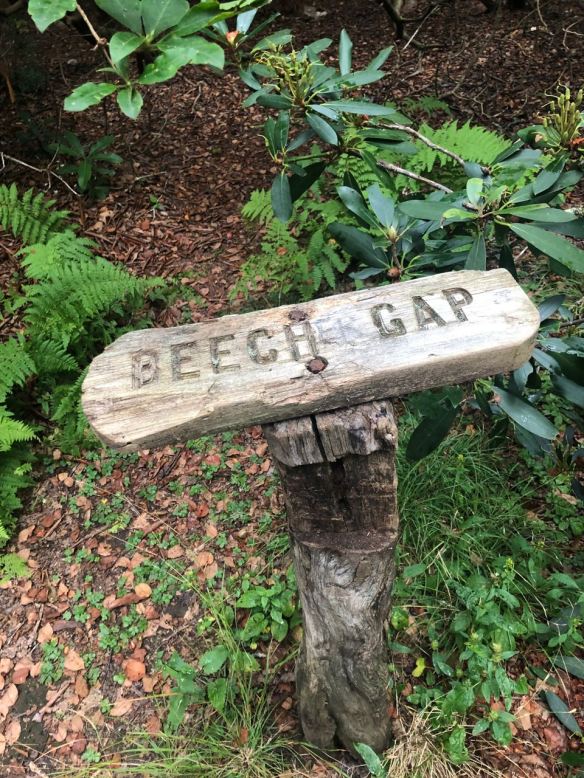 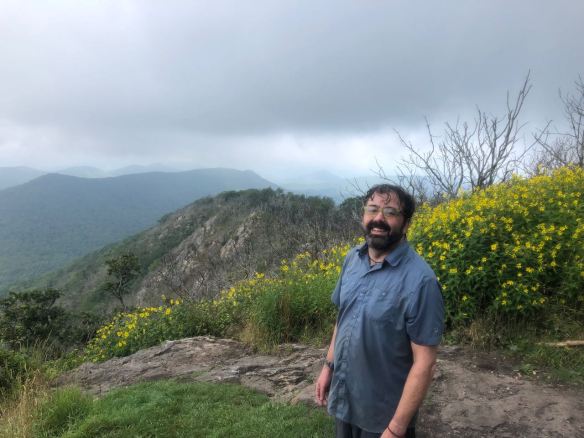 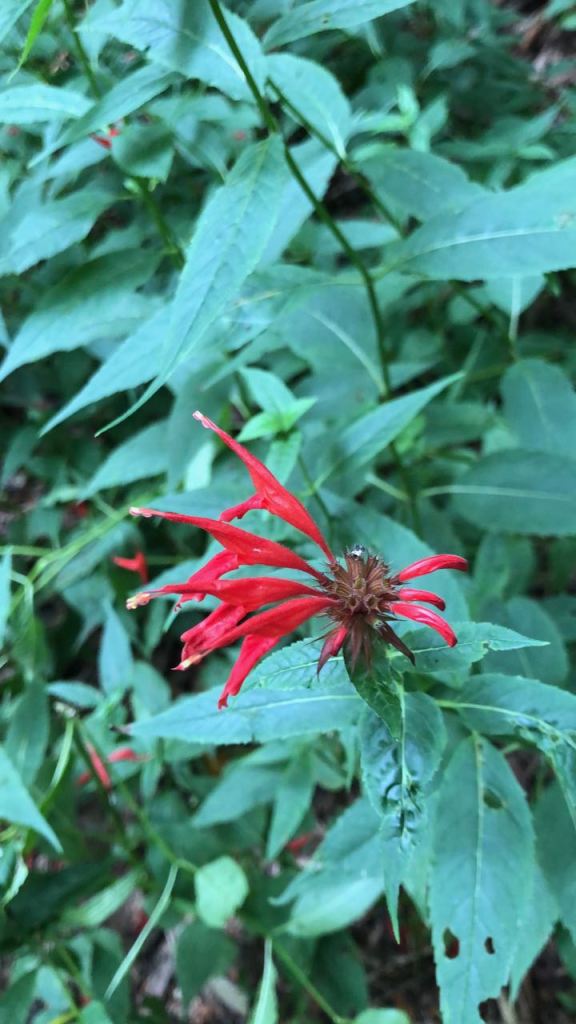 Humans can be very disappointing 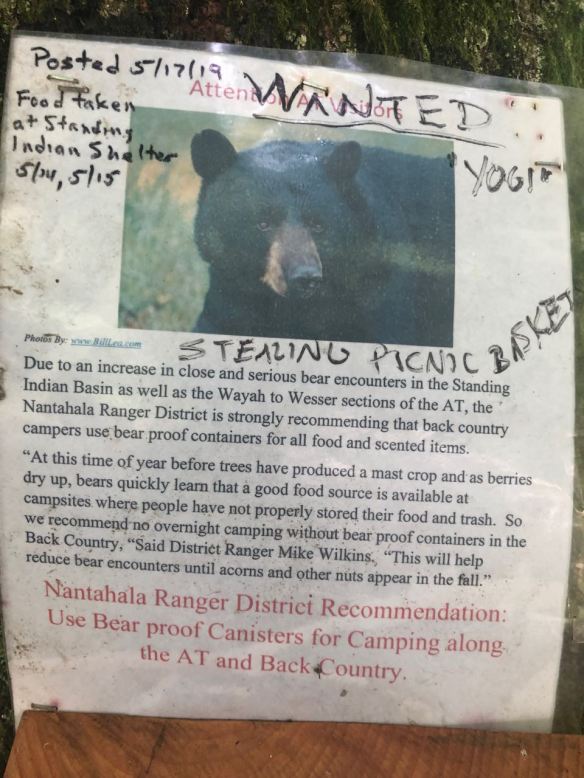 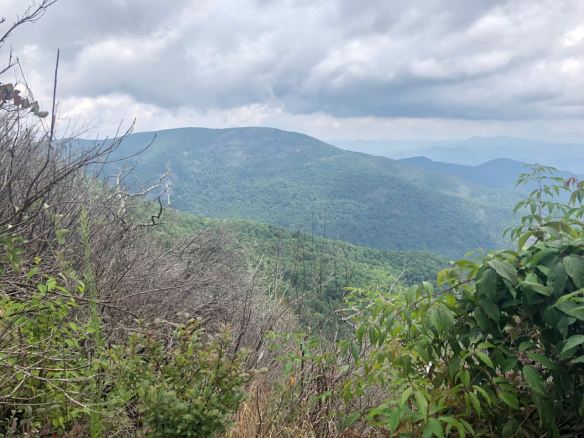 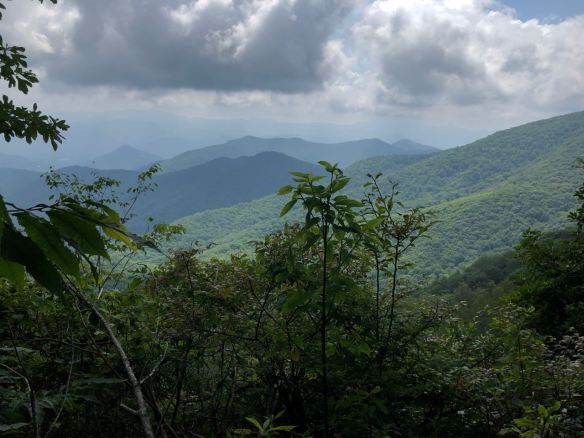 Stunning view from the ledge 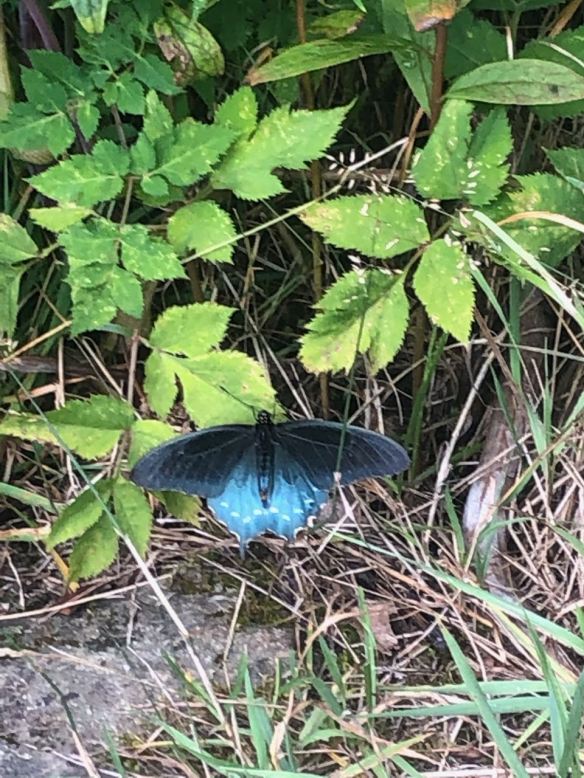 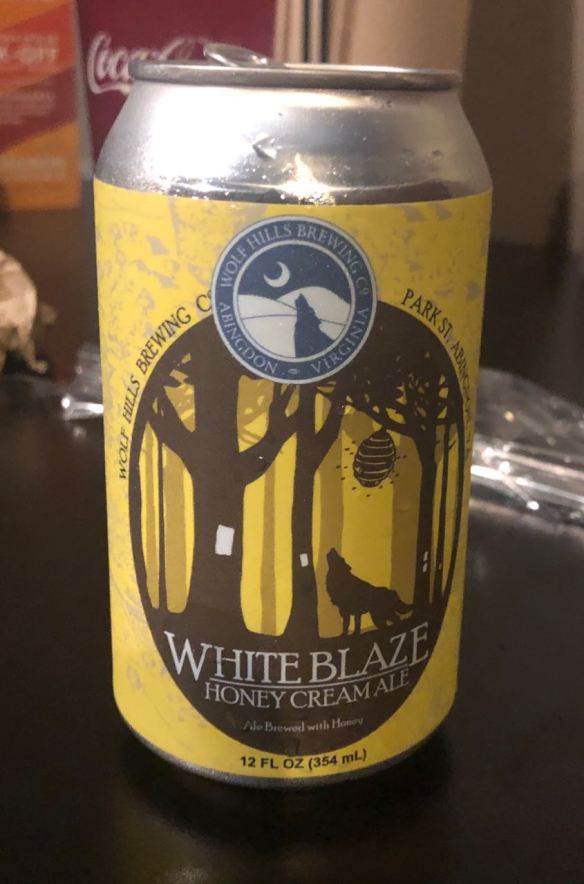 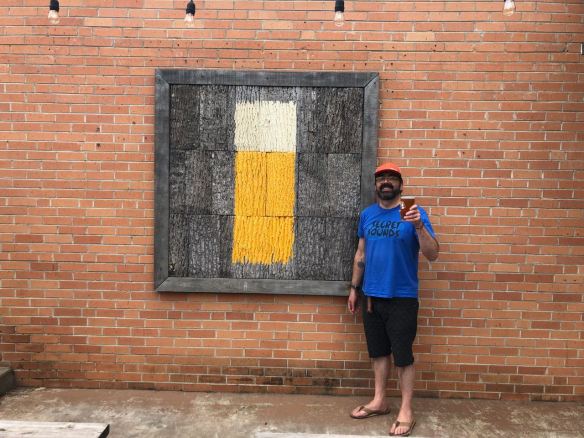 Beer blazing at the Lazy Hiker in Franklin! 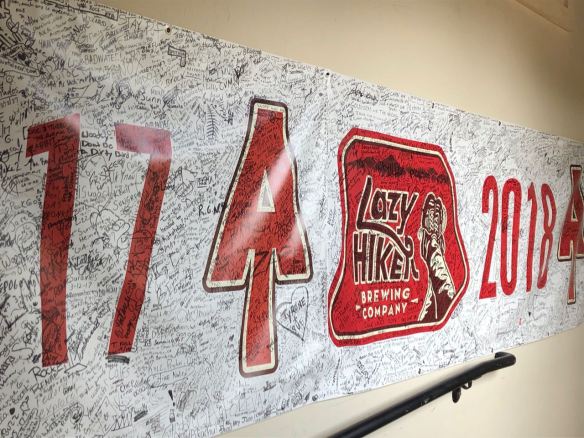