Last week I had the privilege of backpacking the Georgia Appalachian Trail. While I planned for up to 2 weeks, the weather was quite erratic and the cold temperatures bested my sleeping bag and all the warm gear I threw at it. I made the call after day 6 to end early as I couldn’t drop $600-800 on a zero degree bag (and wouldn’t for a section hike) and will come back to finish Georgia and make it up to Deep Gap, NC as planned when it’s warmer and the crowds have gone through. I was at the very front end of the bubble so I still found shelter space and had the honor of accompanying some new thru hikers for their first 53 miles north.

My format for this will be to copy verbatim from my trail journal that I wrote when arriving at camp or a hostel or town each day. I have already completed the video, and you can find that here, if you prefer that format. Everything in italics is an afterthought or comment I made that wasn’t in the journal itself. Photos are below the journal entries.

Miles Day 1-3:  25.7 (including the mile southbound up Springer Mountain before heading back north.

Heavy rain at start, until back at the Springer lot, met Jarhead and his dog, I think they were heading into town because his dog popped his inflatable pad. Mostly downhill and flat until long climb up Hawk Mountain from Three Forks. Missed the turnoff to Long Creek Falls. Started to downpour about 2 miles before the shelter. Here with a crew of 5 and local day hiker Jamie Hiikes. We tried (or rather Paul did) to make a fire but its all wet and windy and is starting to rain again. Going to have dinner soon then sleep — was up early at Donald and Mary’s (Further Appalachian Shuttle) so I should sleep ok.

Got out around 9, with Rockflipper – and I got ahead of him on Sassafras, which normally would kick one’s ass-afras but I felt strong and crushed it. Too bad the view of Atlanta and the Marietta owl towers was a whiteout. Got a few views before the rain. Justus was mercifully re-routed but I still had some climb up it, plus a few more, and 2 exciting creek crossings including Justus creek. I took my boots off for both, and that’s actually good as clean feet also means less blisters. The water was warmish and felt good but I did tear a sock so I’ll get another pair at Neels Gap. Beautiful hike and I saw Mary who was shuttling out the hikers I shared a bunk with the night before, as one of them got sick. People left water at Horse Gap and Cooper Gap

Afterthoughts: (not in my journal)  … and I found out later it was two hikers that joined us at the shelter this night: Lefty and another gentleman who didn’t have a trail name yet. They had a lot of extra so they dropped it there before hitting the trail themselves.

I just got to the shelter and had lunch and rockflipper is here now. Time to hang and have fun. And roll my muscles out.

Afterthoughts: (not in my journal) : I picked that up from Early Riser, and with that and eating banana chips daily I didn’t have a single charlie horse! I also learned later from Whittle that I could use my trekking poles to do that too — just gotta do it before I set up my tent if using my tent as they hold it up!

It was torrential rain all night and thunder and lightning in the early AM. It all got wet, some rain blowing in sideways.  Lefty and his friend had came in to camp later last night as did Oso who is one of my friends now. He hikes with Sleeves and knows him well. We made a video in the AM before McGyver and Snuggles (Paul) and everyone left.  The two late arrivals headed for Neels Gap then Blairsville and Snuggles and McGyver are taking a few days in Dahlonega to switch out some gear. Rain stopped shortly after leaving camp and rockflipper and I headed up Ramrock and Big Cedar — both big climbs but we did get the views on Ramrock before it socked in at Preacher’s rock, where we met some nice local hikers. We checked out Woody Gap and took pics there too. Some pretty cascades on the trail south of Henry Gap where we got off. Mary came out to get us on the trail and we went back to get a room at the Seasons Inn in Blairsville and hang at the Grateful hiker. Then the AYCE (all you can eat) pizza buffet smash! Now we just finished organizing all our stuff for the day/slackpack to Neels Gap tomorrow and tomorrow’s resupply and stay at Mountain Crossings. Enjoying the warm room, hot shower and toilet and town food. Did laundry too and dried out our stuff in a yard sale all over the room. We leave at 10 tomorrow and hope to hit Mountain Crossings by 330. It’s 7 miles, much of it uphill. Bringing my spikes in case it’s icy but starting late so that can melt off a bit. 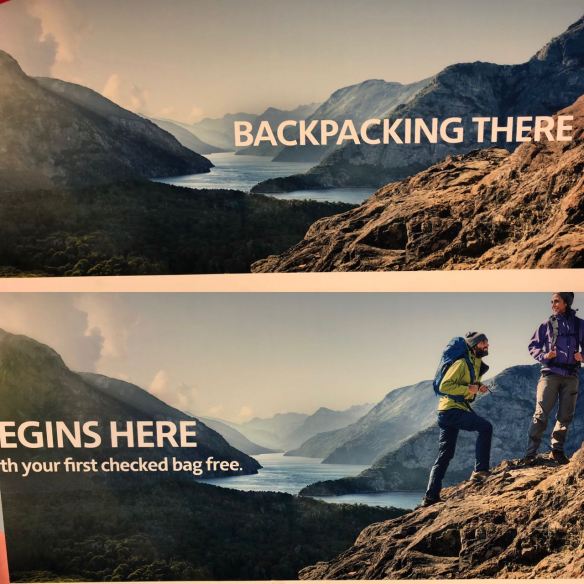 At the Springer Mountain lot

On top of Springer

A shoutout from my shuttle 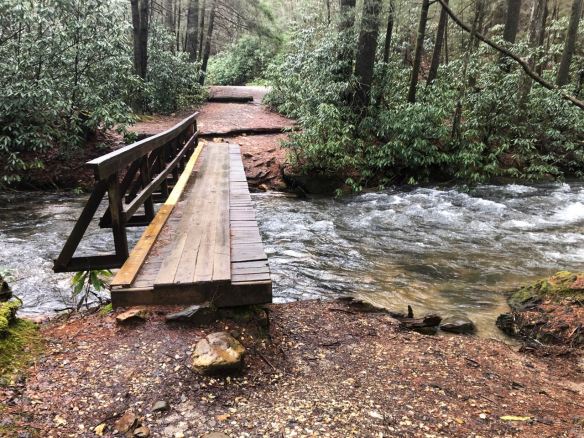 Three forks – all the creeks were super high 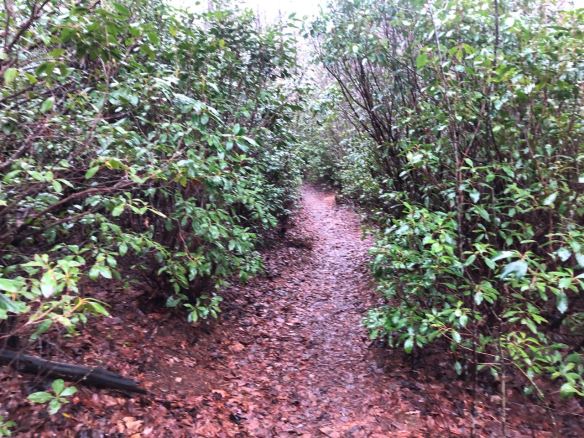 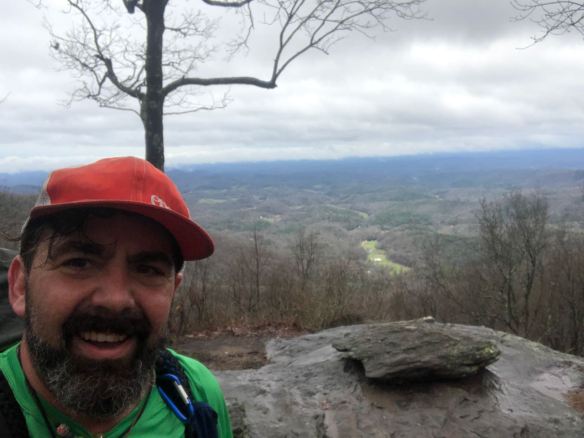 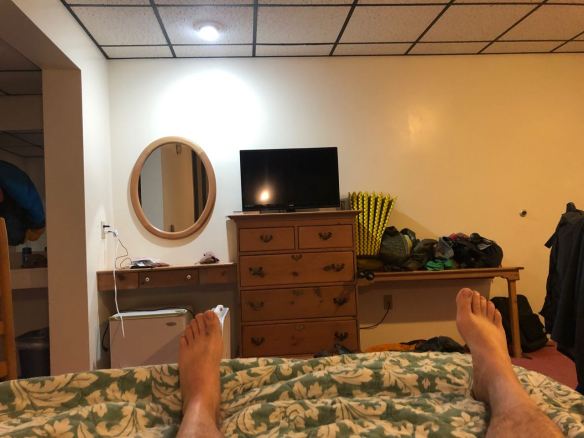 Resting in Blairsville at the Seasons Inn

KT tape to the rescue for hotspots that almost became blisters