We were originally planning to do these as a longer overnight and complete both sections 7 and 8 in one trip, but we didn’t want to over-stress Fielden’s recently recovered knee even though the doc gave the all-clear. I’d also gone on a solo backpacking trip (see last entry below) at that time when we thought it better to postpone this one, so it had been a while for her since she had been on the trail fully loaded up. So we thought we’d focus on taking our time and making it enjoyable — which is why we do it — over mileage. 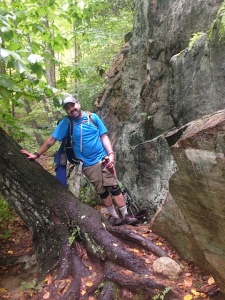 Our ultimate goal is to make it across the Hudson to the Bear Mountain Inn to finish our ‘official’ season. Though we love fall and any additional trips we can get in before it dips too low in temperature or snow falls, we will try to do. But we have already completed from the top of Bear Mountain NY down to the Inn on a previous day hike,  so we don’t need to do that 1100+ ft climb up thankfully. And since we’ve also covered up to just over the Massachusetts border at Sages Ravine, making it to the Inn will complete a large 110-or-so mile continuous section of trail for us, which feels great. And after we do that section to the Inn, which is next weekend, we will have only 30 miles left of NY out of 88.

For the backpacking portion, while the weather had been hot and dry nearly 6 weeks straight beforehand, the rain came back just in time for our hike. In fact, we joked that the fact we hadn’t done a hike together in all that time was why it hadn’t rained and we were personally responsible for the heatwave and drought and needed to get back out there ASAP for the sake of everyone in the Northeast.  The rain did actually come in buckets two days before we headed out, then it dried out for a day and a half, and came back just for our night on the trail. Though it could have gone a lot worse. The rain didn’t come in earnest till we were finishing setting up camp. And it cleared as we hiked out the next morning.  And we were wise to also bring our tarp this time, knowing that we’d be getting some heavy rains. And, pitch it correctly…

Takin’ a load off

(begin flashback/dream sequence)
On our very first camping adventure, which was a car camping one in late 2013, we had similar weather, and next to zero skills. I won’t even tell you how clueless we were on how to pitch a tarp but we ended up crouching and squeezing under it in whatever spot was keeping the rain off and eating half-cooked hot dogs because we didn’t have a stove and the fire was put out by the deluge half way through cooking. Then we spent the rest of the night in the tent, as the storm raged all night. THAT part was fun, and our new tent’s first rain test (this was a pre-first-backpack trip field test) was a success – it held up great!  We had gotten back just into day-hiking at this point and had wanted to move on to backpacking which neither of us had done since we were kids.
(end flashback/dream sequence)

Highlights on the section were meeting some new SOBO thru hikers and running into and hiking for a bit with them on both days, a beautiful waterfall just east of Sunk Mine road in Fahnestock State Park, and making it over the inappropriately named Canopus “Hill”. (I enjoyed a shot of Woodfords Reserve to celebrate that climb!)

We also enjoyed seeing all the amazing stealth camp sites along the way. Our home state of Connecticut is much stricter about doing such things, but in New York there are endless numbers of beautiful spots. While I understand the need for minimizing them, it seems the long distance hikers generally respect the environment along the sections of trail that are not official campgrounds and leave fire rings and the surrounding sites in fairly clean and usable shape.

Linus on the A.T

Many of these spots I could see myself enjoying if my legs were tired and it was not safe to keep going for one reason or another. In this section of New York there is no A.T. shelter for 30 miles, and I don’t believe its fair or safe to push people to hike farther than their body can handle in a given day. People get injured that way.  I’m sure the authorities look the other way if it was a life and death situation, but I think there’s a middle ground as long as the sites aren’t being trashed and used for party spots. I’m sure I’ll get a lot of opinions on this one. But most of the party spots are right by the road crossings, as proven that night at Dennytown Road group campsites.

At the beginning of the hike we also thought we heard another bear cub crashing off a tree branch like in Sages Ravine, but again did not have visual confirmation.

Either way, if it wasn’t, that was one fat squirrel! There were some nice ridge walks though no stunning views. The best one was atop Canopus hill and was fairly overgrown – definitely a better one for late fall-early spring.  And as I was getting to a minute ago, unfortunately the group camping sites at Dennytown road (or at least sites 1-2 which were closest and most appealing after a long hike fully loaded down) were filled with a large group of partiers. Mind you, these were not scouts, or a group of long-distance hikers but a bunch of kids having an epic BBQ and taking over the whole area for their party.

I’m not against having a good time but this is not the first I’ve heard this and it seems to me that the long-distance hikers should get priority on those areas but instead have to camp at the lawn by the kiosk. The lawn is large enough of course, and is right next to a water spigot, which is great for backpackers – but noisy because a lot of cars go down that road all night, and we need sleep more than car campers or party groups. The group sites are farther off the road and quieter. But to be honest, I don’t know what the intent is of those spots. It’s a state park so maybe it really is for them. 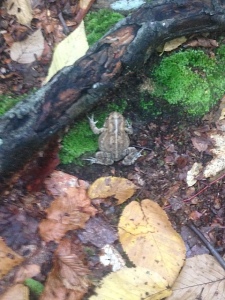 In any case we decided to camp in the woods just off the lawn so we could set up our tarp (need trees!) and for more privacy.  It was a great trip and we still feel like camping ninjas for the tarp move. After we finished that hike we ate at a Texas BBQ food truck stand on Rt 9 which was amazing, and we took the kids back to today after we finished the rest of section 8 as a family day hike. My son “Jiffy Pop” and daughter “Ratchet” hadn’t both hiked with us together for some time, so it was a treat, and made me very happy.

Today we did from Old Albany post road to the Appalachian Market at Rt 9, finishing the section. The market is famed by hikers for its great hot food counter, and while the girls went in to check it out I am saving that experience for getting a nice lunch before we hit the trail again on Saturday.

On our hike today we trekked up Denning Hill which was a workout but not as bad as Canopus Hill and we all enjoyed the view. We paused for a snack there and then it was very easy hiking the rest of the way. We strolled through a few miles of beautiful ravines and forested hollows and the chiming of church bells and almost heavenly light shining through the trees calmed us as we passed through the outer boundaries of Greymoor Spiritual Center.

The two hikes ended/began at Old Albany post road, once a route from Manhattan to Albany with history reaching very far back. This next bit is according to the New York Appalachian Trail guide… (but not verbatim, I am paraphrasing it here).

Once Wappinger Indian trails, the Dutch scouted it for use in 1669. It was then improved and used during the reign of Queen Anne and later Kings George I and II.  It saw postal service from the 1770s and then stagecoach service starting in 1785. The Continental Army used as it well to travel from the supply depot at Fishkill to Continental Village and George Washington traveled it to visit outposts along the route.

There is a former tavern along the road from the day, the Bird and Bottle, that still stands and operates as an upscale restaurant and B&B. The road is still steep, unpaved, and narrow, and the residents have signs everywhere asking for it to remain unpaved and retain its historic authenticity.

The hills we hiked over and around also were fortified at the time and provided shelter and protection for the Continentals when the British moved north to attack, and have names like Little Fort Hill, Fort Hill and Fort Defiance Hill. Sadly I did not see any remains of these fortifications and the old Albany Post road, while still unpaved and rustic, was peppered with beautiful modern estates and homes.

Looking forward to next weekend!