Saturday I went out with our trails overseer and his friend to check on the conditions of a 7 mile section of trail and clean up the blowdowns we could while documenting those we’d have sawyers come back for. It was not at all what I was expecting.

I knew there might be some snow up there. There was certainly when we were in the Shawangunks the previous weekend. I thought there might be 2-3 inches of snow in spots, and these elevations were lower than those in the Gunks so it might have even been less. But I brought my spikes as I knew I would at least potentially need those. Snowshoes would have been a better choice!

We had left a car at the north end and headed down to the start, where the snow on the trail was at least 5 inches deep. It appeared to have been walked recently, but there was only a single set of footsteps. From the start, we were using this hiker’s footholes in the snow, as the top layer of snow was crusty and icy. And so using these footholes made it easier to get through. Of course at this part of the hike the trail rises 800 ft in about 1/4 mile, up through a large crack in a boulder known as Rodger’s Ramp. It was up up up and we took a few photos because the ramp looked even more daunting with 4″ of snow in it. We crested the ridge with some nice views west and south. One thing I do like about hiking in this season is the long views through the trees you don’t usually have when it’s the green tunnel. 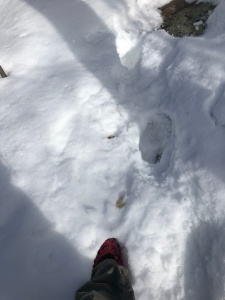 It was another 3/4 of a mile of following deep footsteps to the shelter side trail. Here we inspected the bear box, fallen trees near campsites, replaced the shelter log, and checked the privy. There was one hiker there who had set up his tent in the shelter as he did not expect the deep snow either. As there was no one else there trying to use the shelter we didn’t give him a hard time. Plus it was his birthday and he just wanted to spend it in the woods. Don’t blame him one bit.

We had a snack and then headed out. As he had confirmed he was the one to make the footsteps last night, this meant the next 6 miles we would be taking turns postholing and breaking the trail. We didn’t really look forward to that. Or at the very least, I didn’t. I knew it would be a struggle, and that it was.

I certainly hadn’t brought gaiters on this hike so in short order my shoes filled with snow and ice from making new deep steps in the snow. It wasn’t quite mid-day so this also meant it was barely into the 40’s and my water and snow filled shoes began to get colder and colder with each step. While not completely numbing because it was above freezing and the walking helped keep my feet warm, it was quite uncomfortable and I had to stop and wiggle my toes every once in a while.

We were cutting down every small blowdown that we encountered, which also meant dragging large branches deeper into the woods off trail. So even if the trail had been beaten down by a desired imaginary boy scout troop ahead of us, we were still walking into deep snow off trail many times.

At some point along this stretch, the top of one of my cork trekking pole handles snapped off at the fabric loop attachment. In all my years of hiking and backpacking I’ve never seen that happen. But I have put a lot of years and wear on those poles, and I guess they’d had enough. It’s hard to imagine that would have happened with plastic or rubber poles, so as much as I like the cork, the pair I replaced them with at REI yesterday had plastic handles. I went to REI to ask if they had a warranty on their products like other manuafacturers who will replace a product that fails in normal use.

The manager however thought I was just trying to take advantage of them like others have, which is why they changed their return policy to one year or newer. That wasn’t really my question though and I just called it a loss and used my 20% coupon to get a new pair. I like REI and use my membership regularly there so it will come back to me in a dividend. This was really the first time I was disappointed there. Really  I just felt they should have their own manufacturer warranty as they were REI poles. But they give money to our AMC chapter every year and volunteer with us so they’re still good with me. 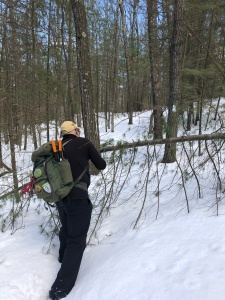 As we reached the halfway point, something else unpleasant happened. My left thigh tightened up on me significantly, making it very difficult to lift that leg and adding strain to an angry muscle with every step. And there were miles to go. It was incredibly painful and I had to stop helping with the tree removal as the main goal for me was to walk out on my own without assistance. This was obviously the result of stepping in uneven depths of snow over and over and suddenly breaking through here and there. Not to mention a lot of strange angles I was moving them in.  We were following old snowshoe tracks now and once in a while the snow was packed down by those heels but half the time we still broke through.

As a result of the thigh issues, my knee and ankle acted up next, feeling more and more sore with each step. This was not my day. I didn’t bring my knee compression sleeves so I had to tough it out. A lot of things working against me at once. To complete the assault of painful ailments, I began to get chaffing as a result of the unusual step/sink pattern that made my pants and compression underwear not function the way they should and not protecting those nether regions adequately. The already steep ups and downs on this hike became even more difficult with all these injuries.

We did take a break at Hang glider view to enjoy the long views to the Taconics and beyond. The snow here was also deep however so break really meant just standing still for a bit and having a snack. Since we were so slow going in the deep snow conditions we were focused on reaching the other end in good time so we never really had a sit down break since the shelter.

The Taconics and Lime Rock Racetrack from Hang Glider view

From reading trail journals and watching youtube channels I realize many thru hikers were facing these same conditions and managing to keep going, though many have already dropped out because of the multiple snow storms and harsh winter conditions that are also happening in the south. I am an experienced hiker and backpacker for sure, and have done many winter hikes. But I was not at all expecting such a difficult day. I can’t tell you how happy I was to reach the road and limp to the car.  It took us 6 hrs to cover the 7+ miles. And all of us could normally do that in half the time. Granted, we did spend a good amount of time stopping to cut and clear blowdowns. And one positive was as the day warmed, the water in my shoes did too and my feet were at least no longer cold. We only saw one other hiker the whole day. I am well aware these days happen, as did with my Labor Day ridgerunning hike last fall. There are really bad days. As with that experience, I am proud that I got myself through it and out of danger. The good days are worth the bad ones. And they’re always a learning experience. 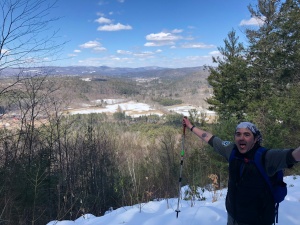 Fielden Stream and I were supposed to go do a section hike with a possible overnight next weekend in northern Massachusetts in our quest to finish the state this spring. In light of these conditions at much lower elevations and farther south, we are postponing a month. We go backpacking together for fun. While we embrace the challenge and occasional unexpected suck that can occur on the trail, there’s no reason to purposefully go into lousy conditions. Deep snow, ice, slush or wet muddy trail is no fun, and as in this case can cause injury which could leave you in trouble when deep in the woods. My leg is mostly back to normal now. My ankle however is still a little sore from all the wacky angles I put it in and sinking into deep icy snow again and again, so that cinches it. 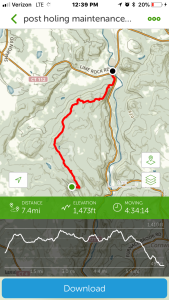 Already tough without the snow

As section hikers we have the luxury to pick when we go. Hopefully a month from now the trail will be in better shape and we can continue our march north to the VT line. We will be doing two sections in May, and its possible we could finish it with those two if the conditions are good and we have big energy! Otherwise it will get completed soon enough!