Just about two weeks ago, my son “Jiffy Pop” joined me again for a hike and some trail cleanup. We were going to be moving to a new home the following weekend and I knew things would be hectic for at least two weeks, so I took the opportunity to get myself and my boy back out on the trail. It had been a while since he was out and time was limited so I chose an easy, but well-traveled section — the Housatonic river walk in Kent.

This section is popular with day hikers as well as long-distance hikers because its a nice long flat scenic section where you can run or walk your dog. There’s also lots of weekenders out here camping, so there’s always plenty of cleanup to do. Fielden Stream and I did our first backpacking trip together on this section, and I do many regular hikes here with our AMC group including my patroller training and re-painting the white blazes. 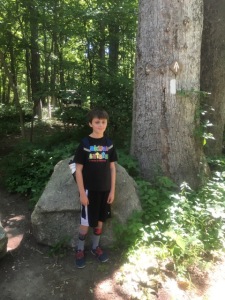 Jiffy Pop in front of a blaze I painted

It starts just north of where the trail descends St. Johns ledges and remains flat until the base of Silver Hill, about 5 miles north. There are two camping areas, one with a shelter and one with group and individual sites. Its a good training hike for young scouts and familes, and is very beautiful. Both campsites are along a brook, and both were flowing strongly on this day, the day before the fourth of July.  This was good to see as many of the water sources the previous weekend in Massachusetts were very low.

As we headed up River road to the south gate parking area, we passed by a very crowded parking area for the ledges, which is a popular rock climbing spot as well. REI had their van there too, presumably for a rock-climbing trip. The trail ascends a boulder field between the sheer cliffs.

Cooling off in Stewart Hollow Brook

You can see pictures in my previous entry when I did that section again a few weeks ago. We got to the lot and saw someone had placed a small American flag in a rock. Being July 3rd, people were already getting in the spirit. We took some photos and hit the trail.

We headed for the farthest point on the hike, the Stony Brook campsites, just over 2 miles north. We had some nice conversations, identified plants including poison ivy, and stopped at Stewart Hollow brook to splash water on our faces and cool off a bit in the humidity. That idea was my son’s, so I want to give credit where credit is due. It was a good one. Refreshed, we arrived at the Stony Brook sites and had a snack. 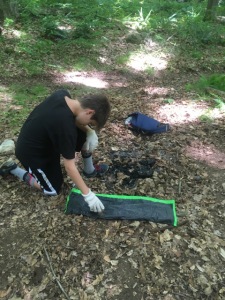 I let him cool off for a bit while I headed up to the group campsite, and sure enough there was one big fire ring there. I spent a few minutes clearing it and while I was there I saw they were recently doing a bunch of work on clearing problem trees so they don’t become more serious hazards to hikers.

I headed back down and Jiffy Pop and I walked up to the individual sites on the other side of the brook. There was one fire ring on the access trail so after we checked out the other sites which were thankfully clear, we got to work on this one. My son did the majority of clearing this one, and as we finished we found a coin that seemed to be a silver dollar but with Bermuda on it. Looking them up they seem to be worth anything from $12-$50, depending where you look. I feel bad that someone lost this here, but not really sure there’s much I can do about it. In any case, it felt like a nice little bit of good karma for the effort.

We then headed back south towards the lot. We stopped into the Stewart Hollow Brook campsites and shelter where we cleaned up the trash and looked for fire rings (none — thanks!). We did find an empty six pack of beer cans so we packed those out and Jiffy Pop wrote a funny anecdote in the shelter register about it. I signed in as well and then we picked up the remaining trash and departed.

We ran into ATC Ridgerunner Ryan on the way back, and we stopped to chat for a bit and I updated him on issues I saw so he could also put them in his report. He was headed from Algo shelter to Silver Hill. Jiffy Pop took some great photos of a daddy long legs on a plant that we spotted on the walk back.

We also ran into 14 other backpackers, about an even mix of Nobo thru-hikers and Sobo section hikers, and 16 day hikers. When we got back to the lot there was a family having a picnic on the other side of the river, and people all around on our way back were getting in the holiday spirit. While it’s always hard to get a teenager outdoors and off the video games, he told me how great a time he had, and that in itself is reward enough for me. I know I love doing this, but passing it down and seeing the joy it brings our kids to get outdoors and give back is very special.

We are going to be taking the kids on a backpacking trip in Massachusetts next month, continuing where we left off with our friends the previous weekend. We all learned to ski on Butternut, so it’s kinda neat that the next section of trail goes over the mountain that its part of.

I will be heading up to Falls Village to check out the trail north of town this weekend. I’m excited to see the new Iron Bridge, possibly the best view in Connecticut at Rand’s view, re-visit Limestone spring shelter and cool off at Great Falls. Then I will spend some time with my family at a local vineyard where I like to volunteer in the fall for harvest. It’s gonna be a great day.

Now that we’re moved into our new home, I will have time to do more overnights for the remainder of the season. The thru-hiker bubble is really passing through now, so I’m sure to see many more backpackers out on the trail and look forward to helping them the best I can.

1 thought on “A Day in the Life of a Trail Patroller: Father and Son”